In 2013, WBR Enterprises Inc. was selected by the Office of Utilities Regulation (OUR) via a competitive bidding process to develop a 20 Megawatts (MW) solar farm – the island’s first utility-scale solar project. The project was the third lowest bid received, in response to the OUR’s request to supply 115 MW of renewable generation, with a proposed price of US$0.1880 per kilowatt-hour (kWh) to deliver renewable energy to the national grid.

On September 18, 2014, WBR subsidiary, Content Solar Ltd., signed a 20-year power purchase agreement (PPA) with the Jamaica Public Service Company (JPS) to sell the full output of its solar farm to the grid.

The 154 acres solar farm, coined Solar Content, subsequently broke ground in Content Village, York Town, Clarendon on July 9, 2015. The $63 million (US) project was financed in part by a $47 million debt agreement with the Overseas Private Investment Corporation (OPIC) and the U.S. Government’s Development Finance Institution for the development. Sponsor equity was provided by WRB Serra, a strategic partner of WRB Enterprises and WRB Energy focused on sustainable infrastructure investments in the Caribbean and Latin America.  The Content Solar plant is the second OPIC-financed project in support of the U.S. Caribbean Energy Security Initiative. 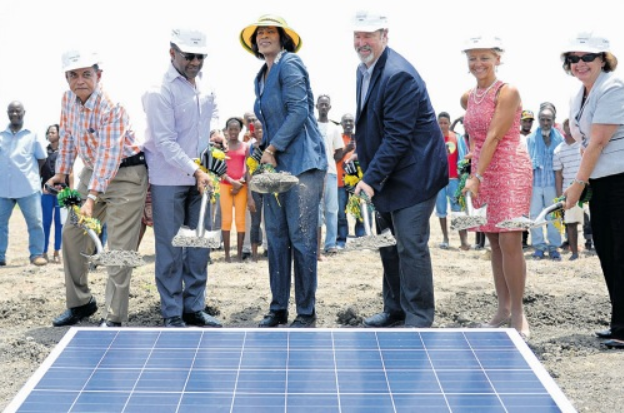 It is worthy of noting here that, the Content Solar plant is the second OPIC-financed project in support of the U.S. Caribbean Energy Security Initiative. The first being the blue mountain renewable (BMR) 36MW Wind Farm also located in Jamaica.

And in a historic move on August 28, 2016, the Content Solar farm was launched into commercial operations as Jamaica’s first utility-scale solar PV plant.  The plant which boasts 97,000 solar panels will power more than 20,000 households over the next 20 years under the PPA with JPS.

According to the Jamaica’s National Energy Policy 2009-2030, the country is looking to significantly increase investments in renewable energy technologies. The country has targeted at least 20% contribution towards the energy mix from renewable energy sources by 2030. The content solar farm pushes Jamaica’s installed renewable capacity to approximately 152 MW or 14.8%.

Jamaica second utility-scale solar project, the Eight Rivers 33 MW solar farm, is currently ongoing and is estimated to be put into commercial operation by the end of 2018. The commissioning of Eight Rivers project will see jamaica’s renewable energy mix at 17.5%. The planned 190 MW LNG power plant in Old Harbour Bay, St Catherine, which is expected to be completed in early 2019, will change this mix.

These are certainly exciting times in Jamaica’s electricity market environment as they seek to lower the cost of electric energy in a bid to improve the country’s socio-economic conditions.