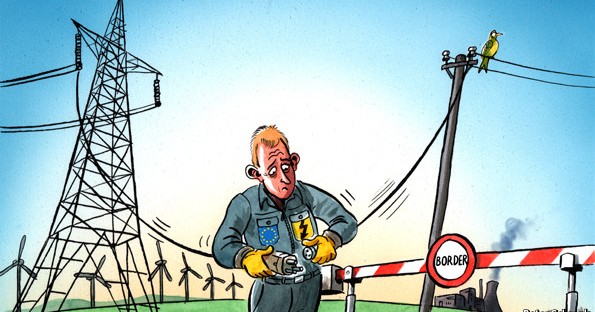 Jamaica is currently leading the English speaking Caribbean in the use of renewable energy (RE) at the commercial level and will probably continue to do so for some time to come. This statement is based in one part on its current installed capacity of 72 Megawatts (MW) and the other on the 78 MW that is scheduled to come online by the end of March 2016. This will give Jamaica an energy mix of about 15 % RE and 85% fossil fuel. Not too shabby – for a poor country like Jamaica!

Recently, the Office of Utilities Regulation (OUR) reported that its received seventeen (17) bids from ten (10) entities in response to its requests for proposals (RFP), on July 31, 2015, for the supply of one or more RE plants of varying configurations greater than 100 kilowatts (kW) and up to 37 MW. The below is a list of the bids received: 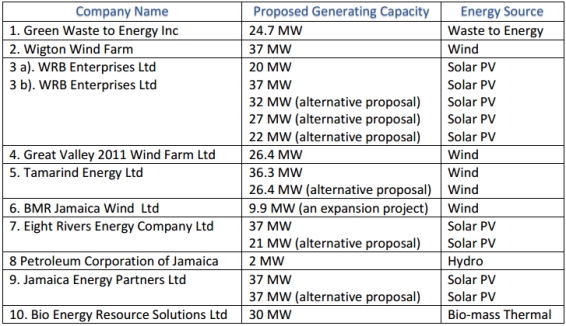 The evaluation of the bids are expected to be completed by April 26, 2016. The successful projects will operate on a Build, Own and Operate (BOO) Basis. In the mix are some familiar names in the RE arena like Wigton Wind Farm, WBR Enterprises, and BMR Jamaica Wind. Surprisingly, but certainly encouraging, also in the mix is Jamaica Energy Partners – a private company that currently owns and operate the two medium speed diesel power barges (Doctor Bird I and Doctor Bird II) and the new West Kingston Power Plant.

The Petroleum Corporation of Jamaica (parent company of Wigton Wind Farm) also submitted a bit to build a small 2 MW hydro plant. Hopefully this is a signal of their intention to incorporate another subsidy company that will possibly focus solely on the development of hydro capacity. Two companies submitted bids to build waste to energy plants. What is apparent from the list is that Jamaica has an abundance of wind and solar resources with a total proposal of 100 MW wind and 130 MW solar PV, considering the primary proposals only. What might not be so apparent is that commercial scale solar and wind projects are shaping up to be the most cost effective RE solutions for Jamaica!

The National Energy Policy 2009 – 2030 (NEP) has identified fuel diversification and the development of the country’s renewable energy sources as two of its main objectives. This latest invitation will bring to completion a Request for Proposals process started in 2012 to receive offers for the supply of one or more plants of varying configurations greater than 100kW and up to 115 MW of renewable energy. At that time 78 MW was identified from three (3) successful bidders. This was later upgraded to 80.3 MW.

This request for supply of electrical energy and/or capacity from renewable sources embodied in 37 MW RFP is in keeping with the Government of Jamaica’s efforts to achieve the targets set in the NEP for incorporation of renewable energy sources in the country’s energy mix. A total of approximately 325 MW of primary RE projects was received. My main hope is that the OUR and the Minister of Science, Technology, Energy and Mining will see the potential benefit of accepting more than the requested 37 MW. This in my opinion would make sense and would also serve to encourage the level of competition that we are now seeing the the renewable energy market.