JPS posted on Linkedin that they are “the #1 investor in renewable energy in Jamaica.” Is there any truth to this? No there isn’t! See my comment and their follow-up comment below. The Petroleum Corporation of Jamaica (PCJ) via is Subsidy Company Wigton Wind Farm (WWF) Limited is by far the #1 investor in Renewable Energy (RE) in Jamaica, with a portfolio of 38.7MW installed capacity of wind energy. See my post titled “Jamaica Leads with 41.93(MW)” for details of the Wigton wind farms. 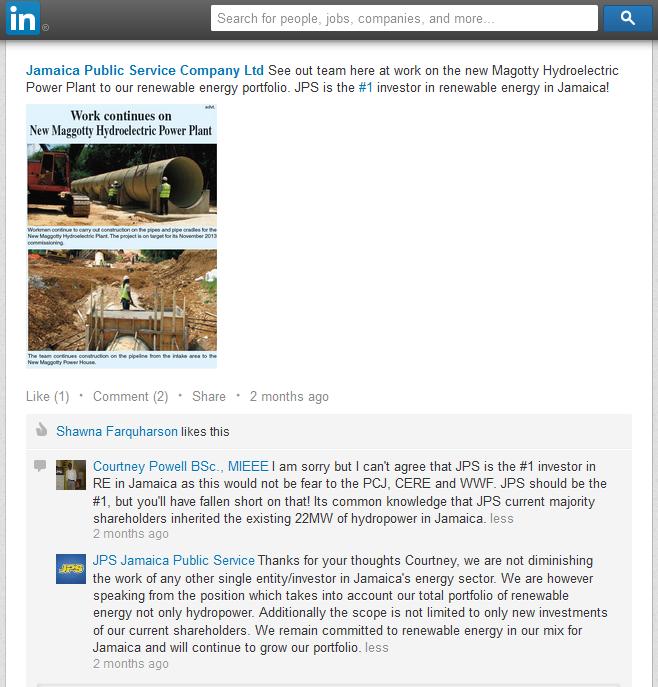 Following from my comment on Linkedin (shown in the excerpt), JPS current shareholders inherited 23.8MW of hydroelectric power (see Jamaica’s Hydroelectric Potential) which makes up the majority of their current portfolio of 25.8MW of installed renewable energy capacity (including a 3MW wind farm in Munro, St. Elizabeth installed in 2010). They are currently in the process expanding the Maggotty hydroelectric plant by an additional 6MW, which when complete will push their installed capacity to 31.8MW which is still less than the total capacity of the Wigton wind farms. So they are really playing second place and even so in terms of investment, I am incline to only consider the Munro wind farm and the expansion of the Maggotty hydro plant, because the 23.8MW of installed hydro power plants were built decades prior to privatization!

Notwithstanding that they are currently under taking the expansion of the Maggotty hydroelectric plant, but what I found ironic about the post, to the point that I decided to write this post, is that the OUR advertised late last year (at end of November) an RFP (request for proposal) to implement 115 MW of renewable generating capacity. The tender closed on the 3rd of June this year (2013) and from that RFP the OUR received twenty eight (28) bids (see official results of RFP), none of which was from JPS. Among the bidders were Wigton Wind Farm with a bid to develop another 24MW wind farm, PCJ that bids to develop a 20.98MW biomass plant, Pan Jamaica that bids to develop a 20MW Solar PV farm and a host of international names (Sun Edison for one presented several bids for solar projects).

On the other hand JPS submitted not one but three (3) bids for the OUR’s RFP to implement 360MW of LNG plant (which also closed sometime this year), amongst bids from three other firms (two of which are joint ventures). So the question I have to ask JPS: “Is RE high on your agenda?” As the grid owner we expect JPS to be ahead of the pack and be a true leader in renewable energy implementation – not playing catch-up and then claiming on social media to be the #1 investor RE in Jamaica.

People what are your thoughts? Feel free to state it in the comment box below……!